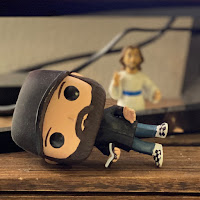 A few months ago I started really thinking about money. It was getting tight around the Myers house as with many other households, thanks to the current climate.

Lin and I have been faithfully tithing since 2013, before that we were sporadic at best.

It was around July 2020 that we stopped tithing. I went on a half day research marathon into all the reasons to tithe and the reasons not to. I came down firmly on the side of you don’t have to. It’s not a commandment, it’s not an offering, it is its own separate thing. It is entirely between you and God.

That’s important, you should never give because someone is watching. It’s better that you give in secret (Mt 6:4).  What you give or don’t give to the church is no ones business whatsoever.

I’ve been behind the scenes of church where it was a much discussed topic. I had a friend told by a church that they knew his wife got a raise and they had noticed he hadn’t up’d his tithe.

I’ve heard a pastor say to the congregation “I don’t know if you tithe, and I don’t want to know.” All the while he knew. Not every one every week but absolutely who gave the most and most often.

In the digital age, with spreadsheets and whatnot, it’s nearly impossible not to know. Thats not always bad, it would be hard to run any institution if you didn’t know where your income was coming and who were you top contributors.  It also allows for those who tithe to report it on their taxes.

If any of that bothers you at all you can definitely give anonymously with cash.

Trying not to treat those contributors different than everyone else is way harder than knowing if someone gives or not.

I’ve been part the conversation to decide how much if any help to give someone when “they don’t even tithe” was brought up as a deciding factor.

So tithing since my conversion in 2013 is something I just thought you had to do. I had no problem doing so, especially with the knowledge it was being monitored. I felt an enormous guilt if I didn’t tithe. I scrutinized what I should tithe on. Is birthday money something I should tithe? What about found money? If someone blesses my family with a gift do I tithe that?

Also as a lifelong church goer even though I might not have been living it I’ve heard the tithing miracle stories, I even have a couple of my own.

I was surprised in my July research to see how many scholars came down on both sides of the conversation as to whether you had to tithe.

We stopped in July and things still ran smoothly, tight but smooth. We definitely were not being “smited”. I had left my job and decided to go back to freelance full time so building that up is slow and money wasn’t steady but it was there.  I worried a lot but, I worry a lot.

I wasn’t having great luck landing clients. A lot of “I’d love to work with you” followed by not hearing from them again. Or in one case “I love it!, However I showed it to a friend and they can do it for me”. I had some money I was expecting but was then told that I wouldn’t be receiving it.  We weren’t in trouble God was providing but it was really tight.

I kept a pretty close eye on things from Aug-Oct.

Then the first Sunday in November I decided to see if there would be a difference if I went back to giving over the next 2 months.  I wasn’t expecting anything huge. I just wanted to see if it made a difference at all.  If I could essentially break even.

Week one I made an appointment with a potential client. I’ve had a lot of those since I went back to freelance none have panned out. The meeting went well and I received a project to work on. Allowing me to invoice by the end of November.

Week two the money I was told I definitely would not be getting was reversed and surprisingly paid to me this week. Allowing me to already have next month rent.

Even more than these two blessings is the fact that I just felt better.  I have the confidence that comes along with seeing the provisions that come when you submit to God.

This wasn’t a financial decision, The goal wasn’t to give God this little bit and get ten fold back. It was just to see if we would still be ok even without the “x” amount of money from our tithe.

Things are still month to month, there is still a tightness there but my attitude has changed and that has made the biggest difference. There is a peace even in the tightness.

The submission of my finances to God was the tipping point that has lead to this peace.

I’m not going to try and talk you into giving, It’s none of my business either way. I just wanted to tell this story and hope that maybe someone gives it a try.