the Day I met a Gangsta Punk. 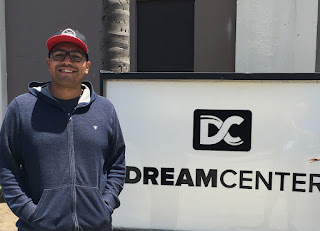 Jonathan Martinez was raised in a single parent primarily catholic home.  He doesn’t remember going to church a whole lot, mainly holidays with his family.  He got into a lot of trouble growing up and as a result when he was 16 found himself in court facing 10 months in jail.
Fortunately for him the prosecutor suggested that rather than jail Jonathan be given the option of serving his time at the Los Angeles Dream Center.

The judge agreed and Jonathan was given a few days to go home and get ready to report to the dream center for his 10 month run.

When I was talking to him he said at one point that even if he had been given the choice of 6 month in jail or 10 months in the DreamCenter he would have chosen the DC because of the freedom you get in a program that you don’t get in jail.
The freedom Jonathan would find there had nothing to do with the freedom he thought he wanted. The freedom he found would be his forever whether in the wide open or confined to a tiny room.

On his last day of being home his brother woke him and gave him small bag of weed as a going away present.  Johnathan didn’t have time to smoke it before he had to be at the DreamCenter so he stowed it and packed for the 10 months.
On arrival at the DreamCenter he was alerted that he would be searched by a large man named Robert.  Upon hearing of the search  and still having this nickel bag on him Jonathan immediately asked if he could use the restroom.

Robert allowed him to go but gave him an “I know what that means” look.
While in the restroom Jonathan wrestled with the idea of flushing the pot.  It was good weed and he may not get another chance to smoke any during the next 10  months so rather than destroy it he hid the pot in his underpants.
After being searched and coming up clean Jonathan was released to got to his room.  Once there he figured he had better smoke the weed before something went haywire.  He didn’t have any rolling paper on him or in his stuff so instead he tore part of a page out of the bible his mother had given him and used that.
Lighting the joint with a toaster in the room, he proceeded to get high.

The next morning a rather large DreamCenter employee came into his room and asked if he had been “up to anything”. Jonathan said “no” and the beefy employe told him that the night cleaning crew had smelled weed and alerted the team.
After denying it again, the DC employee told Jonathan he had 2 choices. He could go to the director of the dream center right now and confess or they could call his probation officer and get him where he needed to go.
“You’re not going to pull any punk gangsta stuff here” said the employee “this is the Lord’s house.”  He said it with such authority that Jonathan ran out the back door and straight to the directors office to confess.
He told the director what he had done. “Because you came to me and confessed, I have to give you grace” said the director.
Jonathan at the time didn’t know what grace really meant but it was with that word that he broke down into tears.
The director continued to tell him that at the DreamCenter discipline is a form of love and as such he would be kept from some activities with the other teens.  For instance the teens that are on campus there get snack privileges and movie nights. Jonathan would be kept away form that stuff for a bit. Confined to his room except for meals and program necessities for 12 days.
It was about the 9th day that he pulled out the bible.  The same bible he had ripped a page out of 10 days earlier.

He began to read Matthew chapter 5, then 6 and then 7. He was getting to know Jesus
What he was noticing and falling in love with was the fact that “Jesus turned the “God thing into a heart thing.”
“Jesus didn’t want you just to repent of sin but to repent of intended sin as well”  he said. “To me that made it a heart thing and that is when I gave my life to Jesus.”

Once his 10 months was over he found himself staying with friends on the DC campus because it was a 2 hour bus ride there from his home and he didn’t want to miss ministry opportunities.

It was around then that he started at the DreamcCenter Academy. This is certified high school alternative offered at the DC for those in and families of those in the facility.

While a student there he met a young lady named Katie.  Katie was there to speak to the youth one evening about service. After she finished speaking she came down and started washing the youths feet.  When she got to Jonathan she told him that she knew one day he would be a pastor and that his family would go to his church.

After graduating high school Jonathan was able to join the missionary training program and work at the DreamCenter.  One of his jobs was to clean the gym of an evening.  Pastor Matthew Barnett founder of the DreamCenter had a weekly game that he would text a few people and they would play late on Wednesday nights.  Jonathan was there cleaning and at some point Pastor Matthew asked him if he wanted to play.

A few weeks after that Jonathan’s youth leader told him that Pastor Matthew wanted to meet with him.
Still having a piece of the victim mentality in him he was nervous but he went anyway to Pastor Matthew’s office.
Once there the Pastor told him that first and foremost he had faith in him. He had seen how faithful he was and how much time he spent working for the Kingdom.

He offered Jonathan a position directing the DreamCenter’s Adopt a Block ministry which was in need of a new leader. Jonathan was 19 when he accepted and did that job for 4 years.
After that again he was called to Pastor Matthew and offered director of outreach. He accepted that position too.

One week while talking with Pastor Matthew, Jonathan was told that the Pastor would like him to  preach at a church in LongBeach that would become the Long Beach DreamCenter.
Jonathan had never preached before but was convinced because Pastor Matthew had so much confidence in him that he could “Faith it until he Makes it.”
He went and preached that week and has been preaching there ever since.

Last December Jonathan again had a meeting with Pastor Matthew. The Pastor started with how much he appreciated Jonathan all the work he had done and how much of a future he had at the DreamCenter.  It was then that Jonathan was offered a decision.  He could accept a role as associate pastor at the LA DreamCenter, the flagship DC.  Or he could take the position of pastor of the long beach DreamCenter where he had been preaching.
Both jobs were positions of honor that Jonathan was humbled by.  He took the day to discuss it with his wife.
When Jonathan arrived home he told his wife of the options and without hesitation she said “looks like we are going to Long Beach.” With that Gods will was solidified in two ways.

First Jonathan had already felt called to take that position.
Secondly several years prior a young lady washing Jonathan’s feet said she knew he would one day be a pastor and his family would attend his church.  It was in their kitchen talking to that same young woman now his wife and mother of two that a vision from years ago came to be truth.

Jonathan had no idea at 16 as a recreational drug user and gangsta punk that God had plans for his life. Plans to change not just his life but a community through his efforts and work with the very place he was being punished.
The freedom Jonathan found was more than not having a curfew it was finding out he was a child of the one true God. With which a freedom is afforded that can never be taken.
For Pastor Jonathan and his family the work continues.

This reminds me of the words of the apostle Paul in Philippians 1 verse 6 “being confident that he who has began a good work in you will carry it to completion until the day of Christ Jesus.” 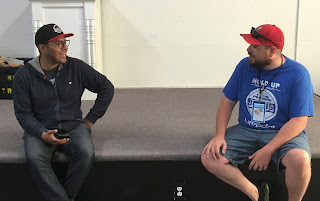 I can’t say enough good things about pastor Jonathan. As soon as I met him I knew I had to hear his story. I had to sit down with this man of God and learn as much as I could from him.

Then to hear his story in his own words, to talk about books we are reading and share in the miracles we have both seen was my number 1 favorite thing about the trip to the DreamCenter.
Since that trip Pastor Jonathan and his wife Katie have been added to my daily prayers. I’m excited to see where God takes them next.