Even the Thinnest Pancake Has 2 Sides 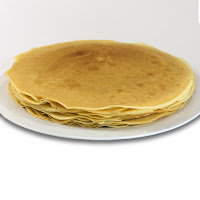 That title is a paraphrase of something I heard Dr Phil say one time and it seems pertinent to todays post.  Count yourself lucky it was almost titled “ A Load of Crepe”

Boy have I learned a lesson I don’t want to forget.

I was talking to some friends today and they mentioned how easy it is to form an opinion that is false or have an opinion planted in you that isn’t even yours.

One day this guy came in to where one of them worked and he was super friendly. Stopped at every desk and said hello just made sure he didn’t miss anyone.  My friend didn’t think anything of it until the person behind her said “Boy, he has to make a scene and let everyone know he’s here.”

That little statement took what was just a guy being friendly and not wanting to leave anyone out, which is legitimately that guys nature and flipped her perception to “what a show off”.

It’s incredibly easy to get an idea in your head that can damage relationships or stop them all together.

I had it in my head for instance that someone didn’t like me.  I let that idea which had no merit color my opinion of him.  I started looking for evidence to back that theory and wouldn’t you know I found it.

That made me not like him and probably lead him to actually not like me by the time I was no longer working with him.

After that I still harbored some pretty harsh feelings until Living Free, a Christ centered support program helped me take responsibility in my mind for my actions.

Still I was convinced he didn’t/doesn’t like me.  That's how deep it goes.  It didn’t help that there was someone that was kind of spurring it on in the background.  Neither of us saw it at the time but I know I do now and I figure he does too.

Not to say at all that is was the puppeteers fault completely. He was telling me that it was my coworkers fault certain things were happening and I believed him. Which was 100% my problem. I was still doing the dance strings or not.

The puppeteer was giving me his opinion, but telling me it was this other guys. He was throwing him under the bus so he didn’t have to have an uncomfortable conversation.

That or he was just a real jerk, jury is still out on that I guess.

I was again looking for evidence to prove what I already thought was the conclusion so I didn’t even question it. Even though I was already starting to see the puppeteer might be untrustworthy in another area.

I was so afraid of a possibly uncomfortable conversation I didn’t just ask. I assumed the worst must be true.

I’ve damaged that relationship to the point I don’t know if we will ever work it out. I don’t hold a grudge at all which is weird cuz even though I prayed about it I just kinda expected that grudge to always be at least a little there.

The lesson is the title the Even the Thinnest Pancake has two sides.

Don’t just assume you know how someone feels. It’s awkward but it would be better for your soul and your sanity to just ask and see.  You don’t have to be friends with everyone, but you have a right to know where you stand and just maybe save a friendship.

Also be careful who is pouring the batter.