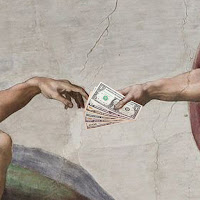 The Wildside, my client for the last 6 years closed in June things got a little tight at our house.  I really struggled with tithing. Money would come in but it would be less than we owed on a bill. Or it would be cash and that made tithing harder.
I wish I could tell you that I tithed perfectly, but I didn’t.  There were a couple times I made $50 and that money went straight in the gas tanks or into school lunches.
Even with the "extra" money I couldn't seem to get a foot hold.

I did snap out of it. I managed to find some work and I decided that tithing would be first no excuses.

That is when I started receiving my “allowance.”

My new clients were not paying on the regular.  I would produce art and rather than paying in the next couple days like I was used to they were erratic.  Maybe I’d get paid the next day or maybe it would be three weeks. It was nerve wracking.

A couple months ago I did some work for a client and they just were not paying.  They were not trying to stiff me. They are simply a large company and paying me wasn’t the highest priority.
We were down to $70 in the bank and I was lost in thoughts about why I wasn’t getting work.  Or why my client hadn’t paid yet.  I was getting depressed.

Then the water pump in Linda’s car went out and It cost $40 just to get the car towed to the mechanic. He worked for a week to fix the car. The whole time I was praying the car would be cheap to fix.

When I got the call that the car was ready, I was told the total was $473.
My face got instantly hot, I pulled over into a parking lot and panicked.  Thanks to the tow I was down to $30 in the bank.
I approached a friend about borrowing $475 for a couple weeks til Linda got paid and he agreed. We loaded into his truck and went to pick up my car.

We pulled up to the garage and my friend put the truck in park when my phone chimed.  I pulled it out of my pocket and looked down.  It was a message from PayPal that my client had paid $550 to my account.
I was stunned. I had been waiting for almost 3 weeks to get paid and hadn’t heard a word from them. Now the very minute I needed it, here it was. I handed the cash my friend had given me back to him.  I paid my mechanic bill off that day without having to borrow a dime.

As I drove away in Lin’s car I started to get really worried about money again.  After paying for the car I was left with just enough from my paycheck to account for my tithe.  The idea occurred to me that I could just bank the left over and have a little extra breathing room.
Thats when something a friend of mine in Living Free said popped into my head.
He was a faithful tither, even when it meant a bill couldn’t get paid. It didn’t matter to him. He told me one Monday night in class that “I’m just thankful to even have the money to tithe.”

That has stuck with me ever since.  To even have that paycheck was a miracle. Not to mention the timing of it.  I drove directly to the bank, deposited the leftover and gladly paid my tithe with the family church app in the parking lot of the bank.

Last Friday Lin got paid and I sat down and paid ALL of out bills for November.  That's a big hit and because I still haven’t learned my lesson I was starting to worry.
The very next day I got a check in the mail. It was from a client that owed me and usually pays me online.  For some reason they decided to cut me a check and mail it this time.  They have never done that.

That’s when I started thinking of my income like God’s allowance.
Just like a child doing chores for theirs, I was working for mine and like a good father he was holding onto it for me until exactly when I needed it.

He knew If I had gotten the $550 early we would have used it and not had money when the car (that wasn’t even broke yet) needed it.
Instead we tightened our belts and made it through just fine and He took care of us in the driveway of the mechanic.

The next week He waited until after we paid bills and took care of our needs before he sent the next bit to help us get by. What are the odds that a client would pay me at 1pm on a Thursday after owing me for almost a month. Or that someone that pays like clockwork online would decide to mail me a physical check

It’s amazing to me that He cares so much and knows me so well that He would use things like the US Postal system to let us know just how much He loves us.

It’s almost December. This is the time of the month when I’d normally begin to get worried. Especially with Christmas right around the corner but I can’t.

Thanking God for my allowance and reflecting on this the last few days preparing to share it with you has given me the confidence in Him that I should have had all along.
I'm not saying tithing will solve your problems, but your Father who loves you wants to bless you and in order to receive your full allowance of those blessings you have to be in His will.

Thanks for Reading,
Alan