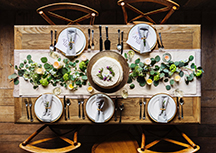 I haven’t written in. A while.  A year or 2 ago someone I looked up to told me I wasn’t good at it and I should stop. He told me he puts 20-30 hours in preparing a sermon and that’s why they “resonate” unlike my blog posts.

So I didn’t write for a long time.  Then when I got back to it after ending a toxic relationship I felt like I was doing it just for spite.  I didn’t want it to be that way so I stopped again.

I thought I should wait until I had something to say.  Something I felt God leading me towards.

It’s been a hectic, crazy and trying 9 months.  I’ve learned a lot recently and God willing I will get to that all eventually but for now I want to talk about the Table.

For years I went to a conference in Texas.  I love that place and it will always mean a lot to me.  It was there that I first heard of a sermon series called the Table.

In the series the Table Pastor Ed young likens the church to a dining table.

The head of the table is for the person that prepares the meal.  In his example that is the pastor.  I’m totally on board here.

Next is the new believer.  You move from non to new by accepting Christ.  You can/should only stay here so long until you hit the next chair which is…

Mature believer.  The mature believer serves in the church, they help where they can and they focus on the first chair.  They set the table, your greeters, ushers, child care, children and teen workers. All third chair serving mature Christians

I love this analogy.  I have listened to Pastor Young preach it several times online.

A pastor from a church I once attended took this idea and taught it at church.  He didn’t exactly copy it, it wasn’t plagiarism.  He spent, as I said earlier 20-30 hours dialing in on the themes.

The crux of the message and something I believed whole heartedly at the time was focused on the First Chair.
Why do we do what we do? Because fo the first chair, the non believer.  Why do we offer a recovery program? For the first chair.  Why do we play the music the way we play it? For the first chair.  Who is Sunday for? The first chair.  This was our battle cry and our excuse.
It is the question killer. I’ve seen it used and sadly used it myself. Someone says that disagree or wants to have a conversation about the way the church is doing something, “It’s not for you, its for the lost.”  If they argue then they don’t care as much about the lost as you.  We nearly broke our own arms patting ourselves on the back for our focus on that first chair

That first chair is incredibly important, but it’s not the only chair.  As church leaders we can’t properly disciple people if we only focus on that first chair.
Getting people into that first chair is priority one but we can’t do that fi we aren’t getting fed ourselves.   No one stays at a dinner table if only one person gets food.

Imagine going to dinner with your pastor and a nonbeliever every week for a year.  Every week the pastor fills the plate of the non believer hoping he will eat.  Many weeks he doesn’t.
Still week after week you are there at the table and you receive no food.  You get really hungry as you watch the non believer pick at his food.
Eventually one week the non believer gives in and eats the whole plate full.  The next week there is someone else in the first seat and he has moved closer to your seat.

As usual the pastor prepares the food, you as a third chair serving christian help in whatever way you can to prepare the table for the meal.
This week the pastor puts out a plate for the nonbeliever and the new believer. Once again you go hungry.  You are happy to see someone else getting fed but that doesn’t stop your soul growling for food itself.

As any cook can tell you, as you prepare the food you are going to taste it yourself.  Sometimes preparing the food is better than eating the food.
I’ve often cooked a meal myself and by the time it came to eat I was tired and I had been tasting the food along the way so I wasn’t hungry when we sat down to enjoy the meal.

So now every week you are showing up early, you are helping set the table but you never get fed.

Eventually you will starve to death, or you will get so bitter at the pastor and the first chair that you may even seek another table altogether.

The pastor can get so excited about the number of people he has had in that first chair over the year and that he saw move to the second chair that he is full sometimes from food sometimes of himself.

I had a friend recently that has been going to a church like this for a few years tell me he was considering leaving because as much as he enjoyed the friends he has there that he looks at it as a good “starter” church.

Another friend recently left one of those churches himself. Telling me that he and his children just were not learning anything.  They were stagnant and not growing so they made the hard decision to leave.

If you are delivering a weekly pep talk, if you are focusing only on that first chair you are failing to live out Ephesians 4:12 12“to equip the saints for the work of ministry, for building up the body of Christ, 13 until we all attain to the unity of the faith and of the knowledge of the Son of God, to mature manhood, to the measure of the stature of the fullness of Christ,

If you aren’t feeding everyone at the table you can’t expect them to continue on following a leader that isn’t leading them.  It doesn't matter how pretty the center piece is on the table if the food isn't there its just a prop.

Feed everyone at the table and see how they will intern begin to feed each other and together we all grow.

That is what I love about my church.  Everyweek, EVERY WEEK there is something becoming the non believer to meet Christ, the new believer to grow deeper and the mature believer to carry on.   I have been fed more and in turn am feeding more now than ever before and its because the Table is not just set but the spread is for everyone milk-meat wirth serving being the dessert.