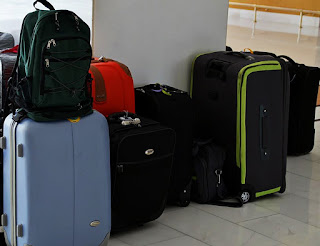 I process a lot of stuff by writing. There is a catharsis in it for me.  Journaling to myself helps but putting out a blog post really makes me feel better.

Knowing someone else may be struggling with the same thing, possibly read my story and not feel so alone helps me too.  So sometimes I over share.

I only know my own thoughts and my own feelings.  I project expectations and sometimes my own faults on others.  I don't mean to offend anyone if you disagree with my perception.  Someone once told me it doesn't matter how thin you make a pancake there is always 2 sides.

With that said, I learned a lesson....

It's not always your baggage that is blocking the hall.

I learned this recently and I’ll share a little about it.....

I let anger get the best of me and I acted uncharacteristically.

Side note: I did start seeing a counselor and have for almost a year and a half. He’s really helped me and if you have an issue like that or anything else really I can’t recommend therapy enough.

Anyway....
I had wronged someone and in doing so inadvertently hurt someone else.

The person I hurt just could not get passed it.
They would say they were but the fruit of forgiveness wasn’t there.
My actions were brought up time and time again.

For over a year I worried because I never knew when or who would be around when my failure was mentioned.  It was embarrassing and it made me anxious not knowing.

Mark Driscoll said recently that forgiveness can be given but trust has to be earned and that is a very true statement.
You can’t just choose to trust someone not trustworthy.  You can say you do but your actions will betray you.
In their eyes I was not trustworthy with good reason.

Finally I got a chance to apologize to the original people I wronged. Not the one I hurt but the one I actually sinned against.

The difference was astounding.
I received genuine forgiveness.
I wasn’t just told I was forgiven. I could feel it.
It was palpable.

As one day wore into the next that feeling was still there.
There was no awkwardness like I thought there would be.  No anxiety wondering when and how it would be used against me.
They weren’t mad at me, they didn’t want to punish me.
There was no balance sheet being kept. There was simply me owning up to a big mistake and then being told that it didn’t matter.

That is true forgiveness and I want to be like that.

Sadly I don’t know how.
I was listening to a speaker today on my way to counseling in Springfield and they said that if you can’t pray in earnest for someone then you haven’t really forgiven them.

That’s when I realized that you can’t learn forgiveness from the unforgiving.

I tried, I practiced the same level of forgiveness that had been modeled to me and it wasn’t real.  It was a face, a mask for my bitterness.

I want to be forgiving, I want to keep no score sheet.
How do I do that?
I actually talked to God about it for a bit and I know that it’s only through His forgiveness of me and my knowledge of that.
I know I have been forgiven and he doesn’t care about my past.
I need to forgive others and not care about my past either.

So now I seek how to do it and actually know it.
To know I forgive someone and to truly not hold any form of a grudge.

It’s hard, really hard.
I’m working on it and I know that “He who began a good work in me will carry it on to completion” Php 1:6

So that’s where I am. Trying to figure out how to truly forgive with the help of the perfect example (Jesus) and a pretty good human one.

I write all this today to say, examine yourself, your grudges and your slights both the perceived and the real.   If you are holding a grudge that’s unforgiveness.
If you tell someone you forgive them but you feel you need to talk about the situation every chance you get, that is unforgiveness

If you are on the other side and feel like you've forgiven someone and they don't accept it, thats not on you. It's not always your baggage blocking the way. So take what's yours and leave what's not.

When you are done reading this throw up a little prayer for me and my effort to do just that.
there is also a great sermon about this by Mark Driscoll here.