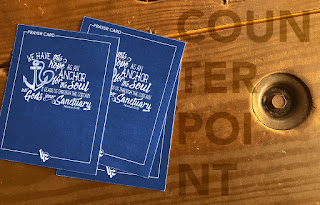 Last week I wrote a little about Nehemiah.

At the end of last week Nehemiah had asked the king for permission to leave for a time and even more boldly asked for safe passage and for the wood to rebuild with. The king granted these things and more to his servant. At some point he even appointed Nehemiah the governor for the area in and around Jerusalem.
Right now lets focus on the time after Nehemiah arrives in Jerusalem but before the wall is finished.

Nehemiah has made the trip to his home city in the company of guards from the king. This no doubt carries weight with it. As he passes through these various governorships he makes known that something is indeed happening. Whether it is by something he says to those in charge as he and his guard pass through or if it is written in the document he shows to ensure safe passage people know the walls are going to be rebuilt in Jerusalem.  He arrives in Jerusalem and gathers the leaders to tell them what God has laid out for them to do.

They all take to the message and begin the work. It is daunting work for sure, the walls of Jerusalem were almost 2.5 miles around, and 39 feet tall. They had been knocked down so there was both a cleanup effort and a rebuilding effort that was going to have to be undertaken.

Still the people caught hold of the vision and they volunteered.
The enemies of Israel were none to pleased to hear of this. The book of Nehemiah mentions Sandballat, Tobiah and Gesham the Arab by name as leaders of neighboring countries within the kingdom of Persia that were against the Israelites rebuilding their wall.

These were all tribes that were originally evicted or defeated by the Israelites in their conquest of Cannan. So the idea that their enemy was building itself back up was an issue.

These 3 governors tried several times to meet with Nehemiah and each time Nehemiah knew through God that it was a trap of some sort so each time he sent the messenger back declined to meet.

These leaders tried to rally the other nations against Israel as well.
Chapter 4 tells us that the aforementioned leaders as well as some surrounding rulers were furious when the wall actually started coming together. To the point that there were threats and the people of Jerusalem felt the the enemy surrounding them.
Imagine if your house was in the center of a neighborhood that hated you. Then that neighborhood was in the center of a town that hated you. Now what if your house had no doors to keep those that hate you out. Thats how they felt, 24 hours a day 7 days a week.

The air in Jerusalem should be thick with fear.

Verse 7-8 says "When Sanballat, Tobiah, the Arabs the Ammonites and the Ashdodites heard that the repairs of the walls of Jerusalem were going so well - that the breaks in the wall were being fixed - they were absolutely furious. They put their heads together and decided to fight against Jerusalem and create as much trouble as they could"

Then, and this is my favorite verse in the whole of Nehemiah right now, vs 9 says "We countered with prayer to our God and set round the clock guard against them"

Lets unpack that. First things first they should have been terrified. Everyone that hated them are concentrated all around them. These people actively wanted them destroyed and their response was "We countered them with prayer to our God."

What an amazing testament to their faith. In a time that they should have been scared to death. When besieged on all sides by their enemies who were actively casein as much trouble as they could the response of the people of God was to counter them with prayer.

Not insults not preemptive strikes, they didn't go back to King Arataxerxes who had given them their blessing and supported them this far and ask for soldiers.

They did 2 things. They prayed and they took watch.
We don't know what they prayed. We do know that that was their first defense and their second was to be ready to defend what God had given them.

There have been times in my life where the wall needed rebuilding.
When things go sideways on you and you feel enemies on all sides, maybe someone in your life is actively making things difficult for you. It's easy to go on social media and fire back, or go and try to rally people to your side.
When all we need to do is counter the attack with prayer. Will attacks still come? Yes they will and like the the Israelites we need to stay on guard but prayer is what will bring us the peace to get our wall built.
As God delivers us time and time again from our enemies, be it attacks from within via our emotions or from without, like a wound from an individual each victory is a brick in the wall.

Think back on all the bricks God has provided you with over the years. The victory over a hurt habit or hangup as Celebrate Recovery puts it. How many bricks have you accumulated?

If you are like me you have more than enough to build your wall.
Once a wall of faith and prayer has been completed few are the enemies that can breach it.

Thank you for reading