The Hard Ask (and a couple other things) 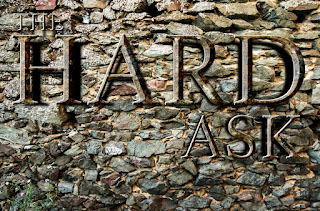 I’ve been reading Nehemiah for about a month now.

In case you aren’t familiar with that particular book or the person I’ll give you a little background.

Jerusalem, the capital city of Israel had been destroyed.  People still lived there but there were no wall, no fortification.  Ideally you would have a capital city surrounded by large walls and if another kingdom attacked the people could retreat to the city and be protected. There were these foreboding walls and Inevitably an army or at minimum guards to warn of an impending attack so you felt safe.

Nebuchadnezzer getting tired of the king of Israel rebelling either by force or by alliance took the city several times and eventually destroyed the walls.  Now, the people had to be under his protection because they had no where else to go no one to protect them.

After the Babylonian exile the people that were banished were allowed to return but the walls were still down and no one was working to rebuild them. They were a defeated people.  It was no better than a village.

How many times have you watched a movie and seen a medieval style village ransacked unable to defend themselves.  Farmers with little to no weapons set upon by soldiers. People fleeing or defending their own home usually to no avail while their neighbors too are struck down. An everyman for themselves scenario. That is how I picture Jerusalem at this time.

Nehemiah was a Jew and he lived in the palace complex in the Persian capital of Susa. His position was cup bearer to the king. He made sure the the king had good wine and had it at his disposal at a moments notice.  As such he was around the king a lot and had a decent enough relationship with him that the king noticed his sad demeanor one day.

Nehemiah was depressed because one of his brothers, Hanani had come to see him and told him just what poor condition Jerusalem was. The fact that the walls were down and there was no indication that the people intended to rebuild it troubled Nehemiah. This bothered him to the point that he proceeded to pray and fast about it.

He knew he needed to talk to the king but that was a pretty big thing to ask.  “Hey, you know that city that always gets too big for it’s britches and rebels or forms alliances with your enemies?” Well I’d like to see it fortified again.” Still it was a conversation he knew had to take place and so when the king asked about his apparent sadness he opened up.

He asked that the king allow him to go and over see the rebuilding of the wall.  Then in what can only be considered a “God moment “ not only did king Artaxerxes let him go but he also provided papers for passage and documents to allow him to use wood from the kings forest for the beams and gates.

Nehemiah went to Jerusalem with both the documents and guards from the king at his side.  When he got to the city he was able to pass the vision God had given him on to the people so effectively that they volunteered to help right away.
It took only 52 days with all the volunteers to rebuild the walls

First is the fact that sometimes we have to have the hard conversations.  We dread them, we avoid them but if we would just be courageous and do it it’s good for both parties.

Nehemiah was dreading his conversation.  As I’m sure any of us would be with something that important but he seized the opportunity and it worked out better than he thought it would.

I know that is how it goes with me 9 times out of 10. I put off the conversation because it will be uncomfortable and in the meantime I run through every scenario I can think of and I fixate on the bad ones.

To the point that even when the outcome isn’t ideal it is NEVER as bad as the ones I imagined.

Like Nehemiah I stew on it to the point it effects my life either in my appearance or my performance.  My worry or nervousness is then noticed and the conversation is forced anyway.

So have the conversation.

The second talking point is ASK.

You may never get that for which you never ask.

This stands in 2 places.  First and foremost in prayer. More about that next week.

Here in Nehemiah his conversation went well beyond what I’m sure he thought was plausible.

It went from “Can I, someone you trust and see everyday some one you rely on take an extended vacation to rebuild the walls of a city that has historically been a problem to you.”
All the way to “Will you also send with me protection and documents to ensure I arrive safely to rebuild the walls of this historically rebellious city.”
To finally “I would also like you to provide the wood for the walls, beams and gates for this city that has so many times stood against the kings in your position.”

By the way the answer to all these questions was yes.

If he had stopped with can I go away for a while, he might have been killed en route, by bandits or while traveling through the areas dominated by the kings governors that were not fans of Israel in the first place including Sanballat, Tobiah and Gesham. All governors of areas under the kings dominion but enemies of the jewish people.

If he did make it there without the paperwork he still would have had little to no wood to build with.  All of the trees that could be used for beams and for the gate were owned by the king.

He was bold in his asking and it paid off in spades.

So ask, make the hard ask.

Not just in your personal and professional life but also in prayer.

God knows your heart but He wants to hear from you. My son Bat asks all the time for things and he doesn’t always get it but he asks. He isn’t scared to ask he knows I love him and so he asks me and when I can, when it is possible, I provide.  Over and above what he “needs”.
He approaches me without fear or trepidation.  I delight in giving my kids what they want.
How much more does God delight in giving to us.

Finally the third point has to do with the building of the wall itself.  The wall was rebuilt in 52 days.  The reason it was done so quickly was because it was done in community. Each family was responsible for the wall in front of their own house. Each family did their part.

This is almost cliche now which is a shame. We have heard it so many times that we glance over it and don’t let it sink in.
They all did their part. They all volunteered when told what the vision was.

How much smoother would things go? How many more souls could be won for the Kingdom if we all took the vision we receive from our pastor and we volunteered.
No pew fillers left in the sanctuary, every LifePointer every Sunday doing something.  No one sitting waiting for the service to start because we are all outside waving people in as they pass, greeting those that come in or milling around in the auditorium talking to new faces.

How would that effect the city of Lebanon, or the lost. How do you ignore 30-50 people on a sidewalk just happy to see you.
Would it be infectious? Would you have so much fun serving (as much fun as I do every week) that you tell others about it and what it means to you.

Imagine if you and the person you sit next to every week were out in the halls greeting or at the doors talking to people that enter. Looking for new faces building relationships with the first timer.  Think about how that could effect them how it can lead to relationships with Jesus, how it could drive baptisms.

Vision drives volunteering.  What is your vision for LifePoint. Is it to bring Glory to God and Love as many people to Jesus as YOU can before YOU die. Period.

As the week goes on ask yourself how you can make this Sunday better for someone else.