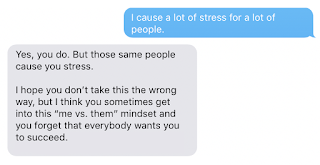 Just last week I had 2 friends speak something to me that hurt but were true.  After I heard them I was a little irritated (or convicted) because I knew what they said was true.

Here is the thing, I have been in therapy for several months working on some other stuff and through that I am able to realize when someone says something that is painfully accurate and asses it as such.  Prior to this I would have chalked it up to that person being a jerk and a great pearl of resentment would begin.
Over time I would wind my thoughts around the statement so much to protect myself that it would become this big issue that I would hold onto as if it had value.

Oscar Wilde wrote “a true friend stabs you in the front.”

Here are 2 things that were brought to my attention.  Ever since I was a kid I never believe it when someone says I did a good job.

For every piece of art I do, every time I speak, every deed I do that I received a “good job” for I doubt.  I ALWAYS think to myself, they were just being nice. If it’s art then I think “its good to them because maybe its better than what they can do or they don’t know better” but they don’t see as much art as I do in a week.

I doubt everyone, wife, kids, siblings, pastor and friends.  I find it incredibly hard to find worth in anything I do.

My friend points out that is a serious issue.  Why do I not trust these people?  Do they lie, or make it a habit of lying?
No? So why can’t I trust them about something like that?

Later that evening I was taking to another friend about the first conversation and how bad I felt afterwords about that and a few other things that were said.  I seek this guys counsel a lot because I know he will shoot straight.  So while I was expecting him to commiserate with me instead he said something else.

He said “I hope you don’t take this the wrong way, but I think you sometimes get into this “me vs. them” mindset and you forget that everybody wants you to succeed.”

Wow! That was the thing that brought it around. Job after job, friendship after friendship I always sink into that mindset.  I never thought a bout it as anything less than self protection but it’s not.  I start a job, I’m happy but over time I start to think someone is out to get me. Granted there were a couple times they were but it shouldn’t color the way I think of EVERYONE.
That mindset makes it harder to be part of a team, makes it harder to trust people or to take them at their word.  So now my mission is to figure out where that comes from and how to stop it.

Over the last 3-4 days I’ve had it come up.  Conversations come up from the past week in my mind and I find myself trying to see the meaning behind what someone says and I’ll stop myself.  I’ll pause and then ask myself “why can’t it just be what it was?
As crazy as it sounds to someone that doesn’t live like this, What if everyone actually does want me to succeed?
What if no one is looking to take me down?  What if I’m actually surrounded by people that are rooting for me or at very least don’t care. What if the vast majority of these unhealthy defenses I've put in place are unnecessary?

So that’s the goal, to look at people without suspicion, without seeing angles taking them at their word until they give me a reason not to.  To think less of me vs them and more of us and them

If you are one of those people that I have shielded my trust from maybe you’ll never know but I am sorry I did us both a disservice. I pray however that this change in me and in my heart and mind is so obvious that you do.

I’m sure I could tie this back to a scripture somehow and really wrap this whole thing up but I’m not going to.  Not everything has to be a sermon.