A Kid from the Congregation (2 Appointments with Pastor Dean) 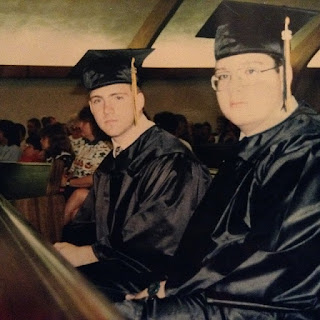 I have had 2 appointments with Pastor Dean in my life.  The first time was in 1996. At the time my family and I were attending the Nazarene church and I was just a kid in the congregation .  One week I had an experience and I felt the Holy Spirit nudge me. I ended up going forward and making a recommitment.
I felt great, no I felt AMAZING! Just like I did the other times in my life that I recommitted. The problem was that feeling would fade over the next few days and I’d find myself doubting.  Why didn’t I feel like that anymore? Was I not saved? Had I done something wrong?

It would weigh on me and after a few more days I would fall back into my old ways assuming that it “didn’t take”. I hadn’t prayed hard enough or wasn’t good enough.

I couldn’t figure it out. I wanted salvation but every time I tried it wore off and I felt less and less worthy.  I just couldn’t shake the feeling of worthlessness.

Finally I decided to call the church and see if there was someone I could talk to. The secretary was very polite and said I could see Pastor Dean if I could get there in the next 30 minutes or so.  I said thank you, got off the phone and drove my mom’s Reliant K up to the church.

I was taken into the pastor’s office and seated in a very comfortable chair across the desk from Pastor Dean.

I’m sure he didn’t know me from Adam’s house cat.  I was just that kid from the congregation. I didn’t attend any youth functions, I didn’t  hang out with the other teens really just some small talk in passing.  My family only attended Sunday mornings. We weren’t sold out to the vision or part of the community but for some reason Pastor Dean found time for me.

I sat in his office and told him what was going on.  How when I confessed my failures and prayed for forgiveness, when I asked Jesus to lead me instead of me taking the wheel I felt great. Then the feeling wore off because I wasn’t saved. It didn’t work.  I just wanted to know if I wasn’t praying hard enough or if I needed to do something else.

That’s when Pastor Dean gave me some advice. Something I have never forgotten and something I have passed on to dozens of teens in youth groups I worked with as a young adult.

He told me that when I talked to Jesus I felt good because I was connected to God. When I left the church and didn’t do anything in my life different I drifted from God. The joy I had felt dwindled and I assumed it didn’t work.
He sat there and explained to me that its more than a feeling. Those can come and go. It’s about believing in Jesus and following Him whether I feel like it or not.  I wasn’t less saved because I didn’t have that amazing feeling I had at the altar all the time. I was saved despite not having that amazing feeling all the time.

He was the first person to tell me that.  So often working with teens you see that. They don’t realize that the feeling will fade and they think something is wrong or they are beyond redemption, unwanted.  It sends some people farther away. Like me when I was a teen, I thought I had done something wrong that God was mad and since I wasn’t saved I guess I could do what I want until it actually works and the cycle would repeat.  Thanks to Pastor Dean having time for just a kid in the congregation I was able to break that cycle in my own life and help others to understand that it’s more than a feeling.

The second appointment I ever had with Pastor Dean was just this year.  In November of 2016 Pastor Dean was chosen to be the grand marshal of the annual Lebanon Christmas Parade to celebrate his over 50 years of ministry.  Kelly brought me some pictures and I designed and ordered a banner we could carry in front of the car because Pastor Deans health had declined and he was going to be inside the car rather than outside or even in a convertible.

I was told by Kelly and his Mom, Nancy Rhoades that Pastor Dean loved the banner and wanted it hung in his home.  To me that was really cool and I was pretty proud of the fact that he liked it that much.  Our first meeting meant and still means so much to me that I was thrilled to do something that he liked something that could make him smile.

It got cooler a couple weeks after the parade when Pastor Dean asked for me.  He asked that Kelly bring me by his house.  I was elated. When I was 16 I made an appointment with him and here I was 22 years later and he wanted an appointment with me.
Kelly took me over there one morning and the 3 of us sat in his living room and talked. He was tired and I thought when we first arrived that it was going to be a short visit. Then as he started talking about God and the Holy Spirit, about dreams he had had and about witnessing to the nurses during his last hospital stay he perked up and we stayed for a little over an hour. It was an absolute honor.

When it was time to leave he grabbed my hand and thanked me for the banner his eyes filled with tears as were mine.

When 2017 started I had decided to keep a list of all the great things God had done for me during the year so I could see how blessed I was.  I stuck a white board to the wall and the very first thing on it was “Pastor Dean asked to see me.” As the year went on that board fell off the wall so many times I eventually never put it back up.

Because of his influence on my life as a teen, and through the legacy he has left us through Pastor Kelly and LifePoint which changed not just my life but the course of my family that invite was more precious  to me than if it had come from Billy Graham.

As we reap harvests from seed planted by Pastor Dean from before some of us were even born
Its safe to say that his influence on eternity is beyond our ability to measure.

With that said, I know when I get to heaven though scores of people will no doubt still be lined up talking to him about his impact on their life he will still make time to talk to that kid from the congregation

Thanks for reading
Alan
Posted by Alan Wayne Myers at 1:56 PM