Get more out of Your Game 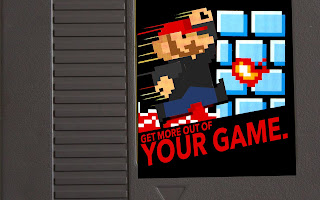 I was talking to my friend Bethany last week and she gave me an analogy for the Christian walk that had never occurred to me before and I wanted to share it with you and extrapolate a little as well.

When I was a kid I played a Mario video game.  Mario games prior to 1996 were side scrollers. The hero proceeded in a straight path towards the right of the screen. You encountered obstacles to jump over. Coins and things to collect plus secrets to discover but always to the right and always forward for progress.

You might discover a warp zone and be able to skip a few middle levels if you were lucky. You might have a friend that had been there before you and could give you some help. No matter the path your goal was always to get to the reward at the end of the game.

I had friends though that played the game differently than I.  They wanted to learn its secrets. To know the game better, to understand the person that created it in hopes to gain insight. They didn’t want to skip a level. It didn’t matter if the level was hard or not. They wanted to get as much out of the game as they could.  They knew where all the coins were. All the side games and warp zones.  Their knowledge and appreciation of the game was far beyond mine because they played it differently. They spent way more time with the game than I did.
They enjoyed the game on a deeper level and had a way more satisfying experience than I did.

If I got stuck I could always call my friends and they would tell me a little more about the game. Where to go, what to do so I could get just a little farther. Believe it or not I even had people that would call me or talk to me at school about their game and I would help them get farther.

No matter how we played the game though we all found ourself at the same place and with the same result when it was over.

That is a great way to look at the Christian walk.  Once you accept Christ your ending is the same.  If you truly believe and put your trust in Him then we are going to the same place. The end of the game is gonna be the same for me that it is for you.

Those that will quit the game or choose to play a different game will ultimately end up somewhere totally different than us.

As a Christian though we play the the original game the best game. The game everyone was built to play. The game that came with the system.

Yes sometimes it glitches and sometimes we have to blow into the cartridge to get it to work the way we think it should but its the way its supposed to be.

How will you play the game?  Will you just try to get through?

Or will you play to learn more about the game and the creator of it.

Get more out of your game, put more into it and get stronger in 2017.