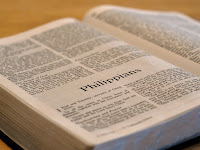 January 2017 week 2 is just beginning.
Last week I wrote a little about how bad I thought 2016 was until I really saw all the pictures from the year and realized how blessed I was.
This week I want to talk about my attitude last year.
Last year I dwelled way too much on the negative.  Right from jump street January 2016 had me down.
It started with our church evaluation.  Our evaluation didn't go bad. If you were at the united night or at the small meetings with Duane and his team you know that it was over all a positive eval.
We addressed the issues head on that we were facing. We got better with communication as a church. From remind, to more graphics on Facebook even more places to see our weekly announcements video that Graham does.
The congregation spoke that we needed a staff youth pastor and we got one. Our youth has thrived ever since.
There were however some bad eggs that tried to skew the results. Using fake email addresses some of which were personally hurtful and multiple accounts marking everything with a strongly disagree.
This anonymous attack struck the first blow of 2016 and it was one I don't think I shook all year.

I thought about it a lot I tried to figure out who it was. I wanted to know who among us could be that petty.  I second guessed a lot after that too, worried I was harboring an enemy.
All of that shaded my attitude the rest of the year.  It wasn't until about September that I realized what was going on.  How my attitude was effecting others.
Instead of trying to bring a positive point of view to meetings or even private talks with others I found myself commiserating with them.

I was not only not helping others I was digging us both deeper in the doldrums of 2016.

In Sept however I decided 2017 wasn't going to be like that.
This year I am going to focus on the wins not the loses.  I will endeavor desperately to show others their wins as well.

My verse for 2017 is Philippians 4:8
And now, dear brothers and sisters, one final thing. Fix your thoughts on what is true, and honorable, and right, and pure, and lovely, and admirable. Think about things that are excellent and worthy of praise.

I know I will struggle with positivity this year, I am a worrier after all.  Still I will try my very best to live that verse for the next 50 weeks and beyond.

Alan
Posted by Alan Wayne Myers at 8:57 AM