The Day I Met a Lawyer 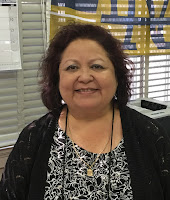 The Peter moment, what is it?
Peter was told he would deny Christ.  Then after arguing with Jesus (that’s a blog for another day) still didn’t think he would.
We all know he did, its mentioned in all 4 gospels. In all but one of them Peter immediately breaks down weeping.
The Peter moment is when when your failure is met with the light of the truth.  Even if its only exposed to you too have no choice but to do something about it.

Irma was once a pretty high powered lawyer for one of the top ten law offices in the country. Her boss later went on to work for a President.

One day while she was working, her boss asked why there weren't more people like her working in law?
She thought he was talking about women and commented back that there were plenty of women in the field of law.
It was then that he handed her a copy of the Wall St Journal where there was an article the said only 45% of latin people graduate high school and only 5% went to college.

That was Irma’s peter moment.  She was face to face with the truth that there were so many she could help besides herself.

Shortly after that meeting Irma Cobian, stepped down from a high powered very lucrative job to become a school teacher.

That was roughly 28 years ago and since her Peter moment Irma has helped countless kids find a better life through education. The passion she has for not just latin american but kids in general is truly amazing.

Irma Cobian is a hero to so many kids that have no idea the life she gave up just to help them.

Irma was well aware of her Peter moment and she chose to make a change.  She chose others rather than herself.  Knowing it was going to make life more difficult for her.

I want to talk to you quickly about another Peter moment.  A second time Irma followed in the footsteps of Peter.  A time that she may have not even realized it but a moment we can all learn from.

See, Irma compared herself to Peter at his moment of failure. It was his weeping for his mistakes that resonated with her so deeply that she chose a new path.

I don’t see it like that. I see Irma more like the Peter of Matthew 4:19-20. Jesus said follow me and “at once the left their nets and followed him.”
Thats the Peter I see in Irma’s example.

Irma heard the voice and she put down her nets, nets filled with the success of the world and carved out a great life helping others and following Him.

Look at your past and the things that made you turn to Jesus. The things that finally allowed you to hear His voice.  Irma had a realization that changed so many lives.  A lot of us don’t have a realization without rock bottom. You hit the bottom and you find Jesus is there waiting.  It wasn’t the circumstances and your mistakes that lead you to the bottom that changed your life.
Don’t give those things the power. Jesus called you out of them and your mistakes are gone.
Your mistakes didn’t change your life, Jesus did.

Thank you for reading.