the Day I Met an Oak Tree 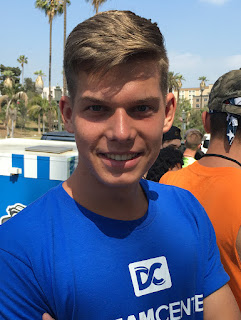 I met a young man named Josh today. Josh is from the Netherlands and was in charge of our group at the LA DreamCenter as we helped with their ministry in MacArthur Park.

Essentially we made a lap at the park and talked to as many people, there as we could. Handing our small fliers about the free hotdogs available at the DreamCenter van.

After the first round we went back and gathered hot dogs to hand out.

I saw some of the crew really connect with a few of the homeless. There was George who recently lost his daughter whom Steph stopped to pray with. Pastor Jeremy kneeled down and prayed with a lady that was  clearly coming off something. She was semi incoherent, rocking back and forth and it was heart breaking. All these people just laying and sitting in the park watching another day pass

Josh has been working at the DreamCenter beginning last January. He spends 2 days a week in that park trying to minister to and love on people. That he said is his favorite part of the job. On the other 4 days in the DreamCenter work week he ministers to others and takes part helping to lead a variety of ministries the LADC has available for those in need. 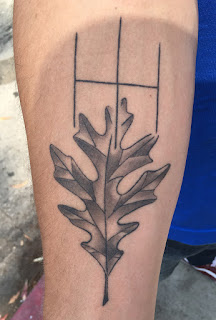 As we walked I asked about the very unique tattoo he had on his forearm.  He got the tattoo around Easter he said and it represented what God had told him.

One day Josh sat down and leaned against a tree to journal his thoughts. . While he rested there he had a vision. In that vision he was in a room with God and a small plant, a tree sprout.

The sprout was small as sprouts are and represented who Josh was at that moment.
God then told Josh that if he were to really surrender to him then out of that plant God would make him a tree.

Not just any tree but specifically an oak.  His roots would grow as deep as his branches stretched high. Like the branches of the oak he would himself branch and have a family one day. His branches would shade the weary and give them a place to rest. His his influence and that of those he mentored would number as many as the leaves of the tree.

When vision passed he gathered his journal and packed them in his bag.
It was then that he realized he had been sitting this whole time underneath an oak tree. The leaves of the oak around him now where he had no memory of them being there when he sat

After that Josh got serious about God.  His life changed. He's in charge of several small groups. He spends an hour in silent prayer every morning. His love of and care for the people of Macarthur park is unparalleled. It is infectious. You can see it in his eyes when he talks about it.

He wants to return to the Netherlands and become a full time youth minister. He is a God changed man. He is changing the course of others lives.

Did I mention Josh has been clean for 6 months?

Josh was originally at the DreamCenter as a resident in a recovery program. God had so much more in mind for him. Through his dedication and Gods grace Josh was fast tracked to work on site as a leader.

Josh is out there 6 days a week talking, inviting, feeding playing with and praying for those that are now lost in the same sea he was once adrift.

My visit with Josh touched my heart and was definitely one of the highlights of our trip.

Thanks for reading
Alan