How many times have you heard “you gotta meet God half way?” 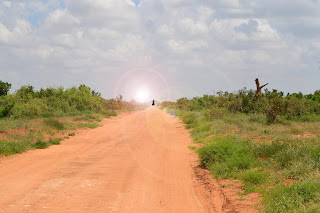 I’ve heard that phrase more times than I can count.  It’s a good idea.  Lets people know that you have to want to change.

The prodigal son tells a different story.  Luke 15: 11-33 Jesus tells the story of a man that had 2 sons.  The younger of the sons decided he didn’t want to wait to get his inheritance. He didn’t know when his dad would die.  What if he was too old to really get out and enjoy it by the time it comes around naturally.

So he asked his dad for his share right now.  He wanted to go and sew some wild oats and have a good time while he was young.  His dad was cool with it and gave him what he wanted.

The young man went off to another place and just blew money as fast as he could. He had a great time doing whatever he wanted. You have money then you have friends and  I’m sure he had friends in spades. No work, no boss just good times.  However soon the money was gone and he found himself in a strange place. Completely broke unable to feed himself. He was dirty, he was broke and he was hungry.  So much so that he envied the food the pigs were eating.

I’ve fed pigs and they will eat anything, they don’t care.  Here was this young man, from a well off family wishing he could have some of the pig slop.

Well that woke him up.  Like a bucket of water in from a dead sleep.  I’m sure it wasn’t easy but he had to swallow his pride. His fathers servants ate better than he did so he decided to go home and see if he could take the position of a worker for his father.  He wasn’t headed home to sleep in his bed. He wasn’t headed home to try and worm his way back into the house. He was on his way back to beg his dad to hire him as a servant.

Look there at vs 20, he headed home and while he was still a long way off his father saw him and ran to him. Threw his arms around him dried his tears, kissed his son and they were restored.

The young son, wasn’t expecting this. He was miserable and he turned towards the direction of home and while he was still a long way off the father saw him and ran to him.
Dropped what he was doing and was so excited his son was headed towards him that he ran.

Doesn’t say the son ran. The son was tired and nervous, hungry and miserable.  Burdened from all the mistakes he made and the embarrassment of having to come home like this. The son wasn’t expecting to be accepted.  He wasn’t looking for acceptance. He was just wanting to be near his family again. Just to be a slave at home was better than free in the world.

If i’m walking towards you and you are running towards me, guess who is gonna cover more ground?

Our Father isn’t going to make you meet him halfway. When God sees your heart turn towards him while you are still a long way off He will run to meet you.  God isn’t waiting in the house for you to come home.  God is waiting on the porch, with his eyes to the horizon and he will run to you if you start home.