Cool News (for me at least)

I did some work yesterday for the church.  After that I wanted to just sketch.

I was listening to my favorite podcast, the Nerdist so I went and sketched the hosts.

Chris Hardwick is the creator.  If you watch the Talking Dead then you know who he is. If not, he hosted G4's Web Soup, He hosts the Talking Dead on AMC right after the Walking Dead, He's been on Comedy Central a bunch including his first hour long special last December.

He's one of my favorite comedians, He wrote an amazing book "The Nerdist Way" which I have read several times.

Anyway, I drew him and his co-hosts Matt Mira and the insanely funny Jonah Ray. I posted it on Twitter and one of his people saw it and contacted me.  Suggested I submit it for Hostful podcast art.

Roughly once a week, the Nerdist podcast has a show with no guests. It's just the hosts. Those are my favorite episodes.
So I reformatted and submitted the sketch. About a half an hour later I got an email from Chris Hardwick telling me he liked the sketch and they will use it on the website for an upcoming episode.

Then I was told if I'd send in a hi res copy of the sketch the hosts would sign it and send it back to me.

So I'm pretty excited.  I will post the signed copy when I get it back and I'll also post screen grabs when its on the site. 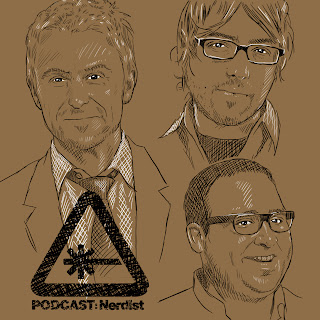 Thanks for Reading
Posted by Alan Wayne Myers at 10:51 AM