One of my closest friends Trevin Satterfield and his writing partner both attend college at the University of Missouri in Columbia or Mizzou as its most widely called.

They entered one of their scripts into a contest and it was picked to be filmed.  Along with getting to film their movie they got to teach a class last year on fim making. This summer they are filming the movie and were kind enough to ask if I and my friend Stew would come be in a scene.

What follows is the story of our trip to Columbia to shoot our scene.

Part 1: THE SET-UP AND THE TRIP & DINNER

Trevin had talked to me about us doing it.  My friend Stew owns an army surplus and gun shop in Lebanon so he would have access to free props for the "Space Marine dream sequence which is our scene.

That was a s far as my knowledge went. Some time this summer we would film in Columbia.  Sunday I got the day confirmation from Trevin. We were going to film on the following Thursday around 10am.

Double checked with Stew so we would have the day saved for sure. Stew however thought the 14th was the next week so it was a bit of a surprise to him when I saw him Wednesday and mentioned our trip being the next day.  He did a great job fo getting props and costumes ready so we could look reasonably authentic.  As authentic as space marines could at least.

Stew then had the big idea that we would drive up the night before and spend the night at the apartment  Trevin shares with another really good friend of mine named Steven.  Unfortunately they already had crew staying there so I decided to get us a hotel room.
I went on Priceline.com to find the cheapest room I could.  It turned out to be a "suite" at America's Best Value Inn.  I got a room with 2 queen beds, satellite tv, large shower............ & bed bugs all for $35 a night.  Granted I didn't know about the bedbugs until the next morning when I woke up with the bites.


I started out behind the wheel of my little Ranger but soon lost that right after I missed a turn off and got us about 30 minutes of course. Stew took over at that point and promptly almost drove us drectly into the lake.

We got to the hotel about 9:30 and checked in.  When we pulled around to park at the hotel. We were greeted by an man in the lot just standing & smoking. He was wearing a shirt with no sleeves, jean shorts and a backwards cap covering a really greasy mullett.  As we got out of the truck he reminded us to lock the doors because his stuff was stolen from his truck the night before.  Needless to say that was the plan anyway so we thanked him locked up and went to our room.

Got settled in, and texted Steve and Trevin to see about getting a bite with them.

It was great to see both of them.  I see Trevin more often than Steve. Trevin comes back from college occasionally to see friends and family.  Steve is pretty busy with work various plays, musicals, film roles, work and girlfriend so he hardly comes back.
Steve recommended a restaurant called the Flat Branch and it was fabulous.  We had great food great atmosphere and fun conversation on the patio.
Steve bought our dinner which was unexpected.  He's a great guy, and he didn't have to so if you read this Steve I know I thanked you that night but thanks again.
After dinner it was about 10:30 and Trevin took us back to the the production office to show us where the editing, planing and brainstorming takes place.  It reminded me of a scene from a Beautiful Mind. I say that cuz there was writing and clippings on the wall and one side of the room was covered in script pages.  It was hectic but you could see that they knew the flow was and it was working for them.

After seeing a couple shots from the previous days, Stew said we ought to get back to the room and get some sleep.  It was about 11 or so when we left, made a stop at Walgreens and headed to the hotel.

I wasn't really sleepy but Stew isn't much for staying up.  He laid down on his bed and I surfed the web for a bit then we watched Storage Wars.  Stew seemed into it then it went to commercial. Before the 3rd commercial was over I could hear him snoring.  I thought it was a joke.  he had just spoken right before the commercial break and I thought there was no way he could go from talking to sleep in less than 3 minutes but he had.

We had decided durring dinner to meet Trevin for breakfast the next morning before the shoot at 7:30 our call time technically wasn't until 10:30 but were were anxious to see how it was going to be set up.

We got around ate and followed Trev to the warehouse that was our sound stage for the day.
There we met Chris, Trevin's writing partner and good friend as well as the rest of the cast and crew for that days shoot.


SIDEBAR: WE MET A CRAZY MAN (with an apparent penchant for pins) 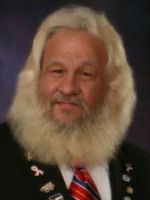 We were waiting at the warehouse for the rest of the crew to show up. To be fair we were way early they were not late.  While we were standing the this dirty man in a faded white t-shirt came up to us and started talking about politics.  Well what made sense was about politics the rest was about not eating corn cuz it was covered in agent orange and at one point he got me to feel his arm skin for the bumps caused by agent orange. Ironically it felt like corn on the cob.
Then he proceeded to talk about his days as a marine sniper.  He ended his monologue by saying God gave him poor vision and his squint later in life as punishment for "The things I did."  I assume  for all the lives he took but I didn't want to really engage him in more conversation.
the shirt he wore it turned out had a picture of him on both sides and was touting his current run for Governor of Missouri. 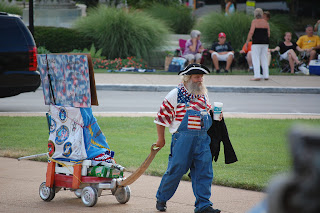 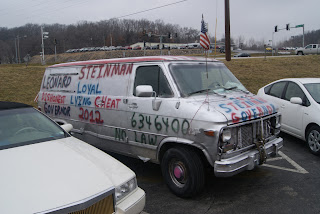 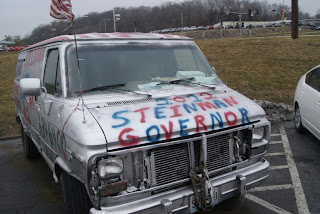 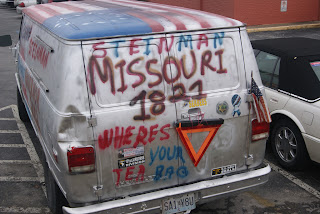 First up was stage dressing.  The scene is basically a dream sequence of an inebriated writer.  He gets hammered and writes what at the time seems like pure gold only to find out he wrote the scene we are in.  It is Space Marines vs Vampires fighting in a floating warehouse in space.

We suited up and did our parts as the Space Marines.  Stew did battle with a large vampire and I covered his and Chris' advance with suppressing fire from behind a stack of pallets. 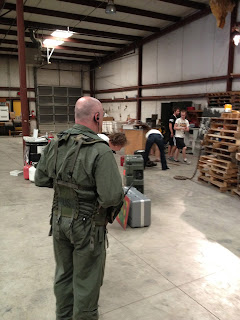 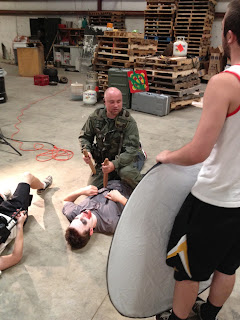 We had a break for lunch and upon our return we discovered Chris being dragged by the foot behind a golf cart to create the appearance that he had ran and slid and was firing at vampires while sliding.  it was a pretty cool shot.  My favorite part came a couple minutes later though when I saw the shiny spot on the floor where they had dragged Chris through multiple takes. 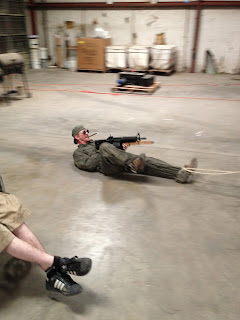 After being there about 7 hours they called it a wrap for the space warehouse and we went to get a drink with Trev at McDonalds.

It was a really great experience I can't thank Trevin and Chris enough for letting us be in it.  I'm anxious to see the finished film.
It certainly wasn't what I expected.  I've shot skits and shorts since high school and this was so different.
They knew what they were doing they had professional equipment and a crew that knew what they were doing.  Stew and I were by far the most unprofessional people on set.

At one point Stew said "Wow, Trevin has really found his place" and I have to agree.  This goofy cut up friend of mine one of the 2 funniest people I have ever met really commanded the room.  The crew listened to him and you could see he had a vison.  From the jargon to the way he carried himself on set it was impressive to see.
It's going to be a good film and I can't wait it see it on the big screen.  They are going to enter it in some film festivals and go from there.  It was eye opening.
Again thank you to Trevin and Chris for letting us be in it.

thanks for reading
Alan