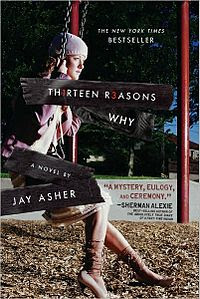 First things first this post is a bout a book and spoilers may be in the body so if you don't want to know the plot, Stop now!
I found myself reading a book recommended to me by Amazon this week. It took me a while to commit. I've had the book for 2 months or better now but it seemed depressing and I didn't need that. Finally though a friend convinced me to give it a shot.
The official summary of the book as pulled from amazon is as follows....
Clay Jensen returns home from school to find a strange package with his name on it lying on his porch. Inside he discovers several cassette tapes recorded by Hannah Baker - his classmate and crush - who committed suicide two weeks earlier. Hannah's voice tells him that there are thirteen reasons why she decided to end her life. Clay is one of them. If he listens, he'll find out why. Clay spends the night crisscrossing his town with Hannah as his guide. He becomes a firsthand witness to Hannah's pain, and learns the truth about himself-a truth he never wanted to face.
See I told you it'd take some nerve to read.
The book is a young adult novel much like Hunger Games or Twilight both series I have read. I got my copy of Thirteen Reasons from Audible.com and it is an audiobook. I know there are book snobs that don't think audiobooks count but I love them.
Especially seeing as so much of this book is the Clay listening to audio cassettes. Certainly places you there with him.
The book is extremely compelling, its nigh impossible to put down.
I highly recommend this book and would love for some of you to read it and let me know what you think.
The book brings up some serious questions in my mind. About an hour in I was irritated with Hannah, and her tapes. I found the idea of someone committing suicide then leaving tapes letting people know she blames them just a horrible thing to do to people.
I still carry a lot of that sentiment after reading. Yes some horrible stuff happened to Hannah or near Hannah but suicide is not the answer and to blame your suicide on anyone else is unthinkable. There is never a reason to kill yourself, EVER.
Especially not the reasons on the first 3 tapes. It's not until the 9th or 10th person she reveals as a reason that I see some of her hopelessness. Still not near enough to take her own life.
Hannah should have went to the police but she made the choice to take her own life.
Hannah however was her own biggest problem in my opinion. She kowtowed to other people and always waited for that other person to stand up for her. It's sad that that person didn't have the where with all to help but you can't blame them for your decision. Especially after the fact.
Those tapes only exist to hurt those who she thinks hurt her.
The first few problems or reasons were with out s doubt petty teen problems that a lot of us have dealt with.
Lies, betrayal and gossip plague Hannah as it did so many of us in High School but we got by.
Pretty much all the people who made fun of me in school for various reasons (weight, family income, glasses, shyness) are all gone and out of my life.
If Hannah had made it thru school and went to college or just moved she would have found things better. Hannah however didn't give life a real chance.
School and the shadows of friends and enemies we made there seldom fall beyond the sidewalk of our teenage years. Good or bad thats how it is.
I have a few friends that I had in school still. I have zero enemies from school cuz they are no longer in my sphere of influence.
I guess thats what I take with me from this book the most and something i need to impart to my kids.
Your school experience good or bad is a blip on the radar. Don't take it so seriously. Yes study, get good grades and a better job hopefully than your dad but it will pass. The storm will be weathered and you will come out on the other side just fine.
Hannah does state in the later tapes that she "forgives" the people mentioned on the tapes. Which is pretty ridiculous on account of the fact she made tapes that will make them feel terrible and possibly suicidal themselves.
She tries to take responsibility for the suicide, but it doesn't seem genuine and the whole set up seems like a big kick in the teeth to those she feels mistreated her.
I'm not saying the guy who was her first kiss wasn't a jerk for starting the rumor that more happened but every single person reading this has had mean hurtful rumors spread about them at least once but we are still here.
So thats my thoughts on the book.
I tried to not spoil it for you. I didn't give any names that are not in the synopsis and you'll have to read the book to find out what tipped her over the edge.
I sincerely hope you give the book a try.
Thanks
Alan
Posted by Alan Wayne Myers at 4:08 PM