I have been submitting several designs to Emptees.com which is a t shirt design community.
You post designs that meet the criteria and then other designers critique or if they like the design the can "Love" it much like "liking" something on Facebook.
Its a lot like high school though. There are 10 or so guys who love each others stuff and those guys are always in the top 10. If your not in their inner circle its nearly impossible to get love from them unless of course it comes with a backhanded compliment.
It seems like these guys must keep Emptees constantly refreshing so they can make snarky comments as soon as possible about stuff. Ive received a couple of their comments myself.
Even though I don't want it to it does bring you down because then no one else wants to love or compliment on your stuff for fear of getting mocked by those guys.
I really wanted to quit the site but I've received several emails from people wanting to buy stuff they have seen on the site. Because of that I can't stop posting there. If its going to bring any income I can't ignore it.

Here is the thing, I have pretty strong willpower when it comes to somethings. For instance if someone writes me a hateful email, I can reply and crush that person then never read anything else by them. plus I ALWAYS state in an email like that that responding isn't necessary cuz it wont be read. If they do respond I can simply delete without even reading.

With that said, I can honestly say I don't read comments on my shirts anymore at all. Good bad or indifferent I simply don't view them.

Im trying to stay active on the site because just this week I sold a design off of it.
I've also been posting things that would never work but I find humerous and seeing as I don't read the comments its fun and harmless. Plus it keeps me active there.

Today a friend saw one of my goofy designs there that I posted just for fun. It was a design that never would be picked up but it was an idea a friend gave me and I was bored.
He started telling me a couple of the comments and they were hilarious. Either the commentators are trying to be "ironic" or they are dumb as posts. I had to share them with you. 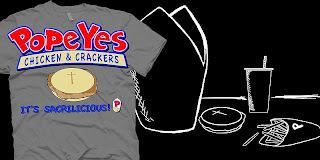 My friend was joking around one day and said that he thought Popeyes Chicken was Catholic propaganda cuz its also "Pope Yes". To me that was funny. So just to make us laugh and because I didn't have anything else going that day I mocked it up.

Here are the comments I recieved. Plus what I thought when I was shown them by my friend

Ugh? -Alex Norman
Really Alex? is Ugh a question to you? Try "Ugh!" you can thank me later

and my personal favorite.

I’m assuming you were attempting make a Pope joke out of this but it still reads Popeyes and not Pope Eyes.

Also, this is a prime example of a lawsuit in the making seeing you literally used their exact logo. -pitchgrim (then he posted a copy of the actual Popeyes logo as if I didn't realize how close they were)

this stunningly dimwitted person thought I wanted it to say Pope Eyes! POPE EYES! What!? Why would I ever make it say that.?
however thanks for adding the legal advice I'd hate to get a letter from Popeyes or the Vatican Optometrist

As funny as I find these 2 comments its still not motivation to read comments regularly. I pride myself on my abilty to ignore them on Emptees but I had to share.
Posted by Alan Wayne Myers at 1:23 PM