Set Up to Fail 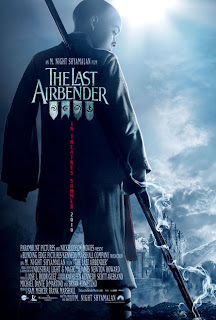 Without my iPhone I find myself without the outlet I normally have to put my random nonsense out there.
I've been thinking about this for a few days now and it seems to me that M. Night Shyamalans's new movie was made to fail.
First off he put out "Lady in the Water" that didn't do very well. Poor enough in fact that Disney opted out of his next film. The amazingly poorly reviewed "The Happening".
This forced him to make a more mainstream movie, one that he didn't write in order to get his status back to where it used to be.
Coming off Signs there was a huge head of steam and LitW just didn't deliver.
With Disney and Shyamalan parting ways and the Last Air Bender being a pretty high end property he had the freedom he wanted and an established universe to draw from.
So here we are, the Monday before the release of the Last Air Bender. A movie I really want to see and I just cant see it making its money back. Thanks to a hefty effect budget, a large marketing campaign and 3D Conversion a process that if anything hurt Clash of the Titans this film tops the scale at over 218 million dollars.
Not too much to expect for a licensed property film durring the summer. Then for reasons, that are beyond me the movie is scheduled to be released 1 day after the Twilight Saga: Elipse. A movie that all ready has people camping out and its still 3 days away.
Not to mention its being released in 2D a lot of places due to the lack of digital projectors in modern theaters.
The theaters that do have 3D capabilities will continue running Toy Story 3 in their digital auditorium. Disney is adamant that Toy Story stay in 3D rather than going flat to make way for the Last Air Bender. Seeing as they passed on Shyamalan's last 2 films, you know they won't make it easy for theaters that do want to go flat. Trust me on that, when I ran a theatre for 4 years I learned just how petty and weird studios can be about house guarantees.
Finally lets not forget that NATO (National Association of Theatre Owners) is reporting box office is down by 7% all ready this year.
It just seems like poor M Night has a lot going against him right now, and I cant shake the feeling that its been orchestrated for some reason for him to fail.
Surely the powers that be know that the Last Air Bender can't compete with a Twilight film.
it just blows my mind and I thought I'd share
Alan
Posted by Alan Wayne Myers at 4:12 PM