So tonight I go into Walmart for a minute to pick up a couple things and on my way in I pass this vehicle. I laughed out loud because it reminded me of those de-motivational poster you see around on the internet. One in particular is a really crappy beat up old van with "FREE CANDY" painted on the side and the caption is "Go ahead dude, it looks legit"
It just struck me as funny that a "security and Investigations" company would have in thier fleet such a beater and that they would advertise on it. Not to mention there wasn't even a phone number.
So I decided to take out my phone and take a pic.
That when, to my shock I heard some guy yell "Hey, hey why are you takin' a picture of my truck"?
I didn't see the guy at the time cuz I was focused on the truck so I said "For fun".
again he yelled "Why you takin a picture of my truck"?
This time however I had finished taking the picture you see below and I was putting my phone away, and I saw he was talking to me from the other side of the truck thru the open windows.
again I answered his question with "For Fun" making sure to slow it down and emphasize it.
He didn't seem pleased and he said "Did I give you permission"? to which I replied as I rounded the corner "You didn't have to cuz its parked in public"?
I walked into the store and I was in the frozen pizza aisle when I saw the guy walk past. Struck me as odd because he was leaving when I got there.
Then as I picked up a couple more things I saw him talking to the security guard and a female manager by the front door. I went around to the check out and the lady and the security guard were alone and staring at me. The lady turned kinda sideways and was on her walkie.
I paid approached the doors and they didn't say anything.
I left, and as I got outside there was a cartpusher who watched me walk to my truck. On the way to the truck I passed the guy in the lot with the lady he was with and some other guy. She was on the phone irrate about something.
So I climb in my truck and his friend ducks down and runs behind my truck kinda hunched down behind another vehicle.
Kinda made me paranoid but not for any good reason. Just weird. 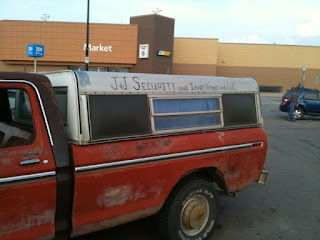