My Brand Thru the Years

I was thinking last night about all the various logo's and designs I have done for myself since High School. Here is a rundown.

pinkfuzzyshoeofdeath@yahoo.com this was my first e-mail address. I lost it years ago. I wanted something that was funny (at least to me). My mom has a cat named Toby and I used to put an old pink house shoe on my hand and fight with the cat. just play around and the shoe protected me from his claws. I'd bring out the "pink fuzzy shoe of death" and he knew it was on. 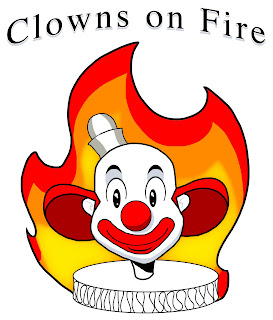 My second e-mail address was clownsonfire@excite.com. I had switched from Yahoo to Excite and I wanted something that was actually exciting. I couldn't think of anything more so than a clown on fire. 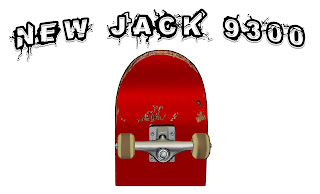 Thru my skateboarding years which started late in my life and only got to last about 6-8 years. I stopped skating after we had kids and I realized I could really hurt myself and do serious damage. Damage that might quite literally cripple me. I was never the "safe" guy. When I skated it was all about the biggest hill. I liked to get towed behind cars to certains speeds then whip past them and bomb. I took many, many horrendous falls durring these years but I had a blast. For those years I went by newjack9300@yahoo.com. back to yahoo. turned out there was all ready a new jack so I picked the number 9300 which stood for the day I bought my first board. September 3 2000. 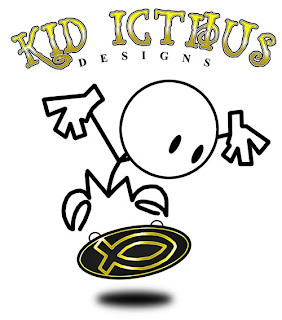 I finally got a job doing art! Thanks to my friend Stew I got a job working at a t-shirt shop in Lebanon. I was hired in the screen room but with the understanding that I was going to get to do art eventually.
Its so bizarre to think back on and realize I had never at that point used photoshop. All the computer art I had done which embarrassingly enough was in my portfolio was done in MS Paint. Other than that it was all pencil and ink and not good either.
However I met Danny McCarthy who became my mentor and still to this day helps me out with Ps questions when I have them. Danny allowed me to come over once a week for a few months and train on his Mac. It was durring that time that I got my first Mac (the dome top swivel monitor iMac). Danny continued to train me and in time I was allowed to bring my mac to work and pulled from the screen room into the Art Room.
I loved working there doing that and learning the ins and outs of screen printing. Danny who is very business minded convinced me to start my own personal company for tax reasons. After playing with a ton of possible handles I settled on Kid Icthus Designs.
I stayed Kid Icthus and actually got some freelance work in town and a few jobs for national companies.
It was shortly after I got my first real paycheck from a freelance job ($900) and I started working at the theatre here in town part time.
I stayed on to become the manager there and just never had time for art. I felt horrible about that and I sold my Mac (G4 Tower) to Stew rather than have to look at it everyday and realize that I'm no longer a professional artist.
My mentor was upset that I quit the old job with him and we kinda lost touch for a while.
I remained Kid Icthus online for a while until someone that hated me but had no creativity of his own started using the handle Kidd Icthus. The extra D was his idea of creativity.
He even bought the domain name kiddithus.com I guess so I couldn't.
Kind did take the fun out of the name and it kind of embarrassed me again knowing that for a while I was doing what I always wanted to do and then I stopped so completely.
Logo was a nod to my first child and the fact that I wanted everything I do to reflect Christ 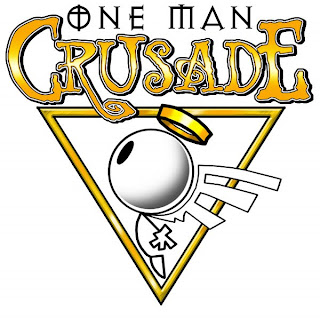 I became the One Man Crusade. it was my attempt to reinvent myself and get back to art. this logo became to this day one of my very favorite logos. I love playing around with stylized stick people.
I still didn't get much done. I was getting my Ps chops back by using Ps on my moms PC on Sunday afternoons.
This handle didn't last long. 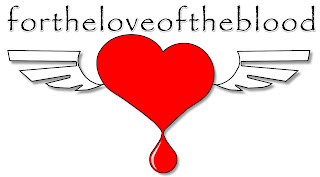 I started trying to get my spiritual life back in line at this point. Which was shortly before I left the theatre.
I was writing religious poetry, and my best friend and musician was helping me set a few of them to music which was cool. He got way into his band and then subsequent bands and I kinda stopped writing cuz it seemed pointless if I was the only one who was going to see it.
This logo the "HeartDrop" was something I was sketching a lot at the time and I really liked it.
That is also where I started my first Blogger Blog.
I found Blogger thanks to Stryper, my favorite band ever. They were having a contest for album covers and I ran a search trying to see what my competition was and I came across Tim Baron's Blog and subsequently Tim's Website thought it was crazy cool.
I started For the Love of the Blood: the art and mind of Alan Myers to keep track of Tm and try to interact with him. He was one of the guys that got me motivated to make some art again.
I discovered Eric Merced's blog thru there too and I wanted desperately to interact with these to really cool really great artists.

After leaving the theatre and buying my Mac Book. I decided it was now or never to get back into art. I got offered my old job as an artist back at the screen print shop and honed my skills while looking for freelance clients.
That job lasted about a year before I was moved to another dept under the worlds worst boss and we parted ways.
Eric Merced convinced me to start a website because his was amazing and to stop calling myself by "handles" and start using my name. AlanMyers.com was taken so I used my middle name as well.
Eric walked me thru and Godfathered my first website. Even went so far as to take the file and re-layout some things.
That is when I started alanwaynemyers.com.
I kept the Heartdrop in my original header and on my business cards but it went thru some changes and became a more sketched looking element. 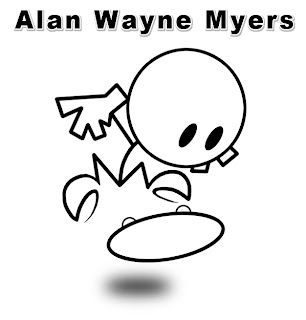 Recently I overhauled my site and went back to the "stickflip" logo I loved so much. Since I first created it this thing has been sketched almost everywhere I could. Entire pages of my sketchbook dedicated to this little guy.
I wanted to change it from the Kid Icthus logo so I dropped the Icthus (Jesus fish) and revamped it making the dimensions a little more pleasing and accurate.
That is pretty much where I am at.
Thanks to some advice I have decided to brand myself as Alan Wayne Myers for good no more screen names or weird company names.
I am Alan Wayne Myers, Artist.
Well thanks for reading all this if in fact you did, and Thanks Tim & Eric make sure you check out their sites.
Alan