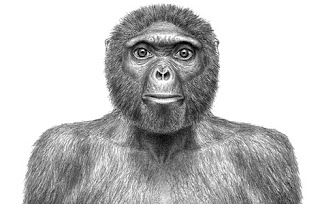 from THIS to THIS
So I was as intrigued as anyone to see the Discovery Channel program "Discovering Ardi". I recorded the show and got a chance to watch it today.
Here are a few of the problems I have with their "science"
Firstly they didn't find a complete skeleton which is where we find ourselves with a lot of these missing links. Not that they are calling Ardi a missing link because they are not. More on that later.
What was found was half a skull, by volume mind you, it was not even close to being intact. 2 vertebrae, a partial hip 1 partial femur, neither upper arm, 1 tibia, 1 and a half fibula and a handful of feet and hand bones. All from the same plot of land and possibly from over 17 of these Ardi's. The bones were way to spread out to be positive they came from the same body. Although it is very likely the same species.
So from there the team of scientists completely made up how the skeleton, musculature and appearance of Ardi had to be.
There is no possible way to know 100% how the spine, hip and legs of this creature fit together and worked. Let alone how it looked while living.
That doesn't stop science from claiming this to be the biggest evolutionary discovery in recent times.
Lets look at a few of the others from the "Evolution Hall of Fame".
How about Nebraska Man? This was a scientific discovery in 1922. A tooth was found that resembled a human tooth only bigger. Science immediately claimed this the link between man and chimp. Drawings were made and papers written on this amazing new find. That was until an identical tooth was found in the jawbone of a wild pig.
Orce Man- a bone fragment found in near the town of Orce in Spain in 1982 postulated to be a cranium bone of a 17 year old man that lived 1 million years ago. For 2 years it was studied and finally a symposium was arranged to talk about the discovery and the implications. In 84 however shortly before the symposium it was finally announced that the bone most likely came from a baby donkey. Since then Orce man has been pretty much ignored.
Finally Piltdown man, I know this one was a deliberate hoax but its worth mentioning because it fooled so many for so long. In 1912 Charles Dawson came forward with fragments of bone that was allegedly given to him by workers from the piltdown gravel pit. It wasn't actually completely disproved once and for all in 1953. That's 41 years to prove that it was a hoax.
Those illustrations completely leave out the non "humanoid" failures of evolution. Which I'm not going into in this blog.
The point is Science is now positive that this Adri is the oldest ancestor to man ever found. Just imagine with computer generated graphics and a handful of bones what science can be sure of tomorrow. Its sooooo exciting isn't it.
Discovery was very clear in the fact that Ardi is NOT he missing link. Ardi is not an ape and not a human he is something else. Over the course of the show they try to convince you that, that something is in fact our ancestor.
Why?
Could it not be just another extinct animal?
Could it not be just a fluke, a mutant of some sort? I mean there is only one of them "found".
1 skeleton does not necessarily prove a species does it?
Or even just a mistake of super eager modern science that is so excited to get their newest paper posted on their moms fridge that they created dots to connect so they could have a full "creation"?
Just something to think about. It seems to me just as likely as assuming that this species evolved into a higher form and all we got was less than a third by volume of a skeleton.
How about this as a theory?
God created the Heavens and the Earth and all its critters. Over time lets say no more than 10,000 years at absolute tops some species died off. At least science has observed that phenomenon.
Alan
Posted by Alan Wayne Myers at 1:13 PM